Originally established in 2010 “as the antidote to the official Oxford Farming Conference” (their words!), my first impression was of an amazingly diverse and well-researched programme of highly relevant workshops and discussions.

Although most farmers probably still regard it as a very ‘alternative’ event, I think it’s fair to say that many of the original ideas driving the establishment of the ORFC, such as concern about the impact of industrial farming and the concept of agroecological and regenerative farming practices, are fast becoming mainstream issues—and rightly so. 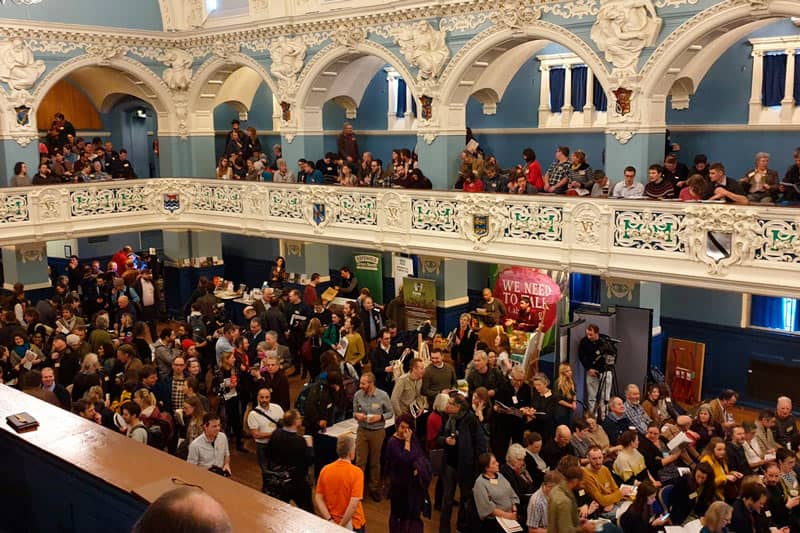 The Main Hall at the Oxford Real Farming Conference: a buzz of activity

The range of subjects covered at ORFC and the diversity of attendees was something to behold, and I can safely say that most farmers –  conventional, organic or otherwise! – would have not only received a warm welcome but found plenty of interest over the two days. I definitely came away with many thoughts and ideas and new views on the farming conundrum, and hope to return in 2021.

The talks I visited ranged from the release of the latest version of the Farm Carbon Cutting Toolkit to a discussion on ‘Lean Farming’ and its potential impacts on quality of life and productivity. However, the main thing I came away with from the event was the fact that science is now recognising the importance of grazing animals within the landscape and that ruminants can be very much part of the answer to many of the societal challenges we face. The key take away for me was that much of the science now indicates that the climate impact of grazing ruminants in agriculture is probably much lower than previously calculated.

On that front, the most memorable discussion for me was one called ‘Ruminant Methane and its role in Global Warming’. The session was excellently chaired, with several very informed speakers talking about the practicalities of new metrics to help us understand methane emissions and the potential environmental impact. According to a speaker from the University of Oxford, the conventional Global Warming Potential (GWP) metric used to measure the impact of greenhouse gases on the climate can be misleading when applied to methane emissions. A revision of the GWP calculations, called GWP*, has been shown to be much more accurate in terms of the calculation of methane on global warming, and most importantly takes into account the fact that methane has a much shorter impact duration than carbon dioxide. (Let’s not forget that in global terms there has not been a huge increase in ruminant numbers on the planet than there were 100,000 years ago.)

The key take away for me was that much of the science now indicates that the climate impact of grazing ruminants in agriculture is probably much lower than previously calculated. 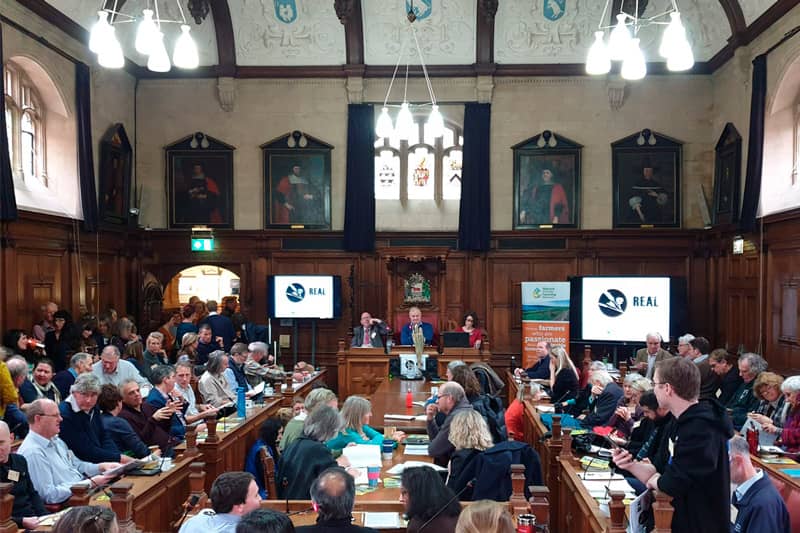 This is all very exciting because if you combine this with the research from the Farm Carbon Cutting Toolkit, which is showing that integration of livestock can have a dramatic effect on soils ability to sequester carbon, it will help to show ruminant production in a much better light. That is not to say that, as farmers and growers, we should not all be doing a lot more to minimise agriculture’s climate and environmental footprint. But it is good to know that the impact of grazing ruminants is probably much less than is being currently stated–particularly in the media.

If you’d like to learn more about the GWP* metric and why it matters, I’d thoroughly recommend reading the following resources:

Which leads me on to the latest incarnation of the Farm Carbon Cutting Toolkit. The newest version of this useful resource has a much greater application for calculating how carbon is emitted within the farm system and also allows for the GWP* calculation, which will make the tool a lot more useful and relevant to the many farmers who felt the climate impact of ruminants was being overstated—particularly good news for less intensive operations. We look forward to seeing this tool in action on more farms and helping to tell the real story.

The session that made me think most about my own farm was the one entitled ‘The Lean Farm, how to cut waste, increase efficiency and maximise profit with less work’, led by Ben Hartman of Clay Bottom Farm in Indiana, USA. Indeed, Hartman’s book of the same title has also caused me a lot of consternation in the way we approach our business. I recommend that people read his book, as it certainly helped Nic and me to look at things more objectively on our own farm, and Hartmann has really made us think about our farming system and how we can improve it. Ben certainly promotes doing a lot more with dramatically less than most farms in the UK are currently utilizing.

The final talk I listened to was one of the closing debates, ‘Linking Sustainable and Healthy diets to Farming Outputs’. Despite the huge range of discussion at the event, I suspect this talk is also likely to get most attention from external media interest, because the opening speech came from George Monbiot, just two days after his ‘Apocalypse Cow’ programme on Channel 4 where he predicted the end of all farming. I am sure that attention is what Monbiot sought the most.

Despite his antagonistic rhetoric, Monbiot was reasonably well-received and indeed received polite applause after he had made his opening statements. (He later claimed on Twitter that he was “booed to the rafters”, which was simply untrue.) Monbiot was followed up by fellow investigative journalist Joanna Blythman, Patrick Holden and Richard Young from the Sustainable Food Trust, and pioneering organic grower, Peter Segger. The session was excellently chaired by Sarah Sands, editor of BBC Radio 4 Today Programme. However, I was frustrated by the way the entire debate was framed around Monbiot’s questionable vision that all food will be manufactured in intensive bio-production plants powered by solar panels within the next two decades, a vision that can only reveal his lack of knowledge about food production systems.

Even if this technology could be safely and successfully scaled up (which is far from proven), producing all food at a small number of large plants would mean massive amounts of transportation of key elements and nutrients to produce it, with all the inherent risks of biosecurity and food security that brings. With all the hi-tech patents, intellectual property and vast levels of investment already involved, it would also almost certainly result in the even greater concentration of corporate control over food production than already exists today–a scenario that should fill any independently-minded person and any nutritionist with utter fear.

I feel Monbiot has a limited understanding of what a truly balanced diet is and even less about the importance of agriculture within the ecosystems and human society as a whole. On our own farm, we have seen a dramatic increase in farmland biodiversity as we have employed more grazing within the farm rotation. I do fear that Monbiot’s ability to promote and shout his ideas from the rooftops owes more to watching Trumpian rhetoric than considered debate.

Nevertheless, this one talk did not take away from what was an enthralling and interesting couple of days at the Oxford Real Farming Conference. It’s a conference that I would thoroughly recommend to any farmer or grower who can get away for a day or two to attend in the future. It’s well worth taking the time out if you can.

Videos of all the key presentations from the Oxford Real Farming Conference 2020 will shortly be available at the conference website. Find out more at https://orfc.org.uk/