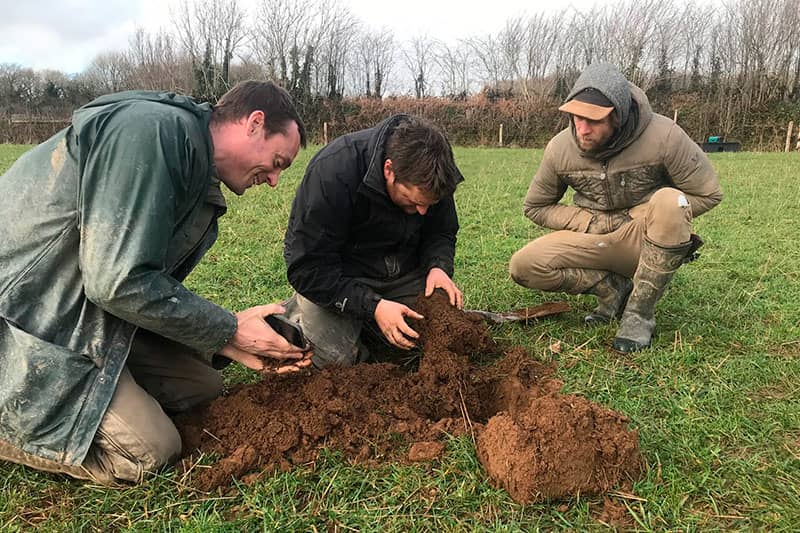 As you might have read in our three previous posts (see the end of this article for links), the aim of this Defra-funded ELMS Test and Trial project is to field-test three different soil scanners to understand if they can produce replicable and consistent results against a baseline of traditional methods of soil assessment.

The soil scanning took place on numerous farms across the Southwest last autumn and we’re now moving into the next phase of the project: an on-farm review of the results. The scanners work in different ways and we weren’t expecting them to all show the same thing. But we did want to explore where there were clear differences. So for this part of the project, only the Hutchinsons Soil Optix scanner was used to take soil samples to calibrate the results.

We thought it might be interesting to share some of the on-farm results, and Dan Cox’s Melilot at Crocadon Farm, St Mellion, has kindly given permission to share scanning images of his farm.

Melilot at Crocadon Farm is a mixed grass and vegetable farm on the bank of the river Tamar. The farm is organic and has over 130 head of sheep as part of the fertility building process. Herbal leys and cover crops are used to improve soil health and structure.

Two of Dan’s fields were included in the overall project, but for this article, we’ll focus on Field 7. This field was split by an electric fence with stock grazing when the Veris scanning machine was on-farm, and so was scanned in two parts (shown below as East and West) with only two-thirds of the total field scanned – hence there being two pictures for the Veris scans and only one for each of the other results.

Note that budgetary constraints for the project meant that the Precision Decisions and Agrovista Veris machines only scanned the fields – no additional soil sampling could be done. The Veris machine provides a soil organic matter result from a sensor that is trailed and in a shallow furrow cut into the soil. The Hutchinsons Soil Optix machine cannot provide any results without additional soil sampling for calibration, so that’s why it was chosen to do the single set of soil tests for the project.

Electro-conductivity (below): The lower the number, the lighter the soil.

Organic Matter (below): From the Veris scanning, this field has an OM range of around 6-7%.

The blue areas of the scan are the areas where the soil is heavier, while the red areas indicate lighter soil. Precision Decisions provided results from scanning at two depths. Only the shallow scan is shown here: 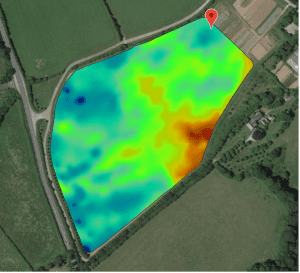 As Hutchinsons took soil samples as well as scanning, there are multiple results for each field. Key factors are shown below: 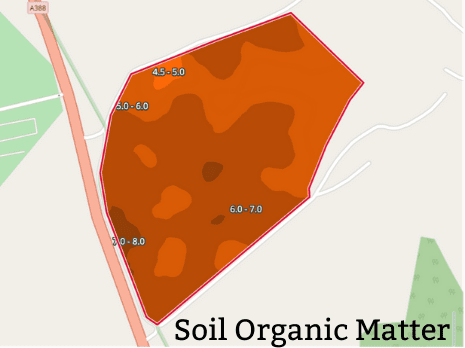 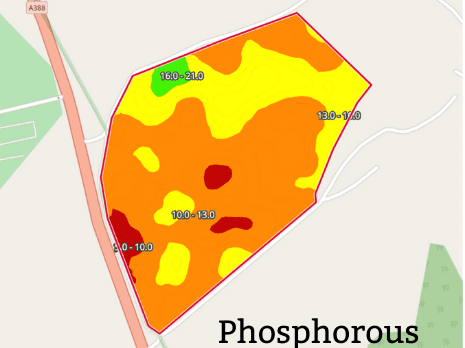 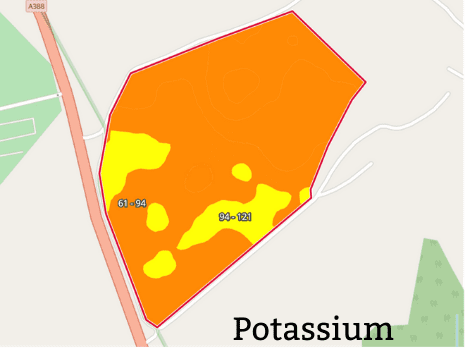 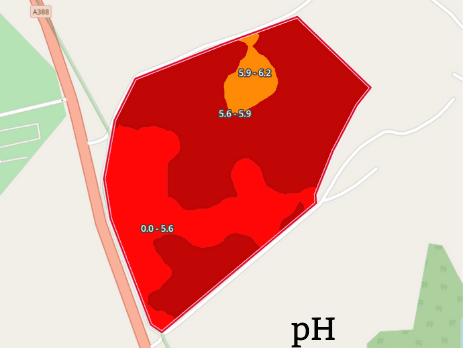 From the combination of scanning and soil testing carried out by the Hutchinsons Soil Optix, we were able to produce maps of the variation in nutrients and pH across the fields (shown above). These maps can be used to target applications of nutrients to address deficiencies. Looking at the maps, P and K levels in this field need to be improved. For pH, we know that the range for optimum plant growth is around 6.5 to 7.0. The results above show that the scanned field is lower than this ideal – with an area below 5.6 in the south-west corner and the rest of the field mostly 5.6 to 5.9. In this scenario, nutrient availability for plants will be decreased and liming is therefore recommended.

SWFC’s Tom and Anthony visited Dan’s farm and dug holes to ‘ground truth’ (quite literally in this case) the scanner results. Holes were targeted to areas where the scanners showed big variations in soil type within the fields, and where there seemed to be differences between scanner results. A good verification of the variation in soil types shown by the Precision Decisions machine was shown by this process.

While Tom and Anthony were digging holes they also did some soil health analysis. The two photos below show marked differences within a small area in one field. Dan has been experimenting with cover crops and the results we found on the farm certainly prove their value, with much-improved soil biology and drainage compared with the area where cover crops were not used.

The photo at the top of this page shows Anthony (centre) with Dan Cox (left) and Rory Sheehan (right) digging a soil pit in the corner of the curve around the top left-hand side of Field 7. This area scanned as light blue (heavier soil) with dark blue patches by Precision Decisions and also showed with the heavier ground by the Veris scan. The investigation showed that both scanners were correct and this is a heavier area of ground in the field. There was some compaction around 3” below the surface that is likely caused by the sheep. 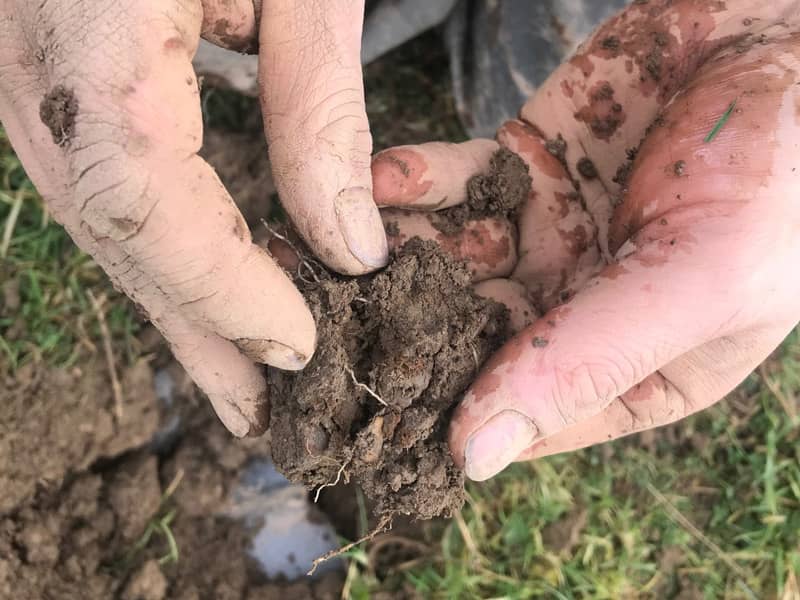 Further investigation in Field 7 was carried out in the area of the field highlighted by Precision Decisions as light soil, midway along the bottom boundary of the field. This was an interesting soil pit, as although the soil is light, it is also very compacted and lacking pore space. This is not something that is picked up by scanners and reinforces the value of physical inspection.

The measurement and management of organic matter (OM) and soil organic carbon (SOC) is key to the Tamar AONB ELM test and trial project. As noted above, the Veris scanner and the Hutchinsons Soil Optix both provided results for OM in Field 7. Both scanners showed the highest level of OM in the western edge of the west half of the field by the road, though the Veris scanner gave a slightly lower result of around 6.9% where Soil Optix recorded 8%. Conversely, in the eastern half of the field, Soil Optix recorded around 5-6% OM, whereas Veris suggested this part of the field could get to 7%. These figures are all lower than the overall figure from the laboratory soil sampling carried out by Duchy College as a different part of this project – a result of 8.9% – which may be related to the depth at which samples/readings were taken.

There is no ‘right’ figure for soil organic matter, which will vary hugely depending on soil type. The figures at Melilot at Crocadon Farm are higher than the quoted average range for the UK of anything from 1.5% to 6.5% but lower than those of many of the livestock and arable farms SWFC works with. Dan’s use of herbal leys and cover crops, combined with the integration of sheep into his rotation, should all help to continue to build organic matter on his farm.

This small snapshot of results shows the type of results that can be gained from soil scanning. As you can see, the most detailed results come from a combination of scanning and soil sampling, which builds a map for each field of the different nutrient levels. We’ve only shown nutrient maps from Hutchinsons Soil Optix for this project, as they were the only company who was given the brief (and the budget) for soil testing alongside scanning. But both Agrovista and Precision Decisions would normally also soil test as part of the scanning process. We’ve also only shown a selection of some of the major nutrients, SOM and pH, but micronutrients like sulphur, boron and manganese can all be included once you start soil testing.

At SWFC, we are increasingly using the combination of scanning and sampling to guide management decisions on our clients’ farms. As can be seen from some of the results at Melilot at Crocadon Farm above, the mapping of different nutrients often shows significant variation – not only across the farm but also across individual fields in a way that isn’t possible when you only carry out soil testing. For Dan and his landlord, there is already a focus on land management to improve soil health. The soil scanning results were interesting, although with three different sets to look at (not something that would normally happen outside of this kind of project), it was useful to have SWFC’s guidance to pick out key points.

The on-farm visit was also key to guiding recommendations for future management. As shown in the photos above, there is still no substitute for going out and digging soil pits when it comes to an assessment of compaction, earthworm counts and soil structure. In summary, soil scanning is a really useful tool, but to get the best out of it, it needs to be used in conjunction with other tools in the box.

Thanks to @chefdancox of Melilot at Crocadon Farm for allowing us to share some of his results.

Interested in learning more about soil scanning and sampling? If you would like to discuss how our new soil scanning service can help your farm business, please do not hesitate to get in touch. Call for a no-obligation chat on 01503 220002 or send us a message on our Contact Page.