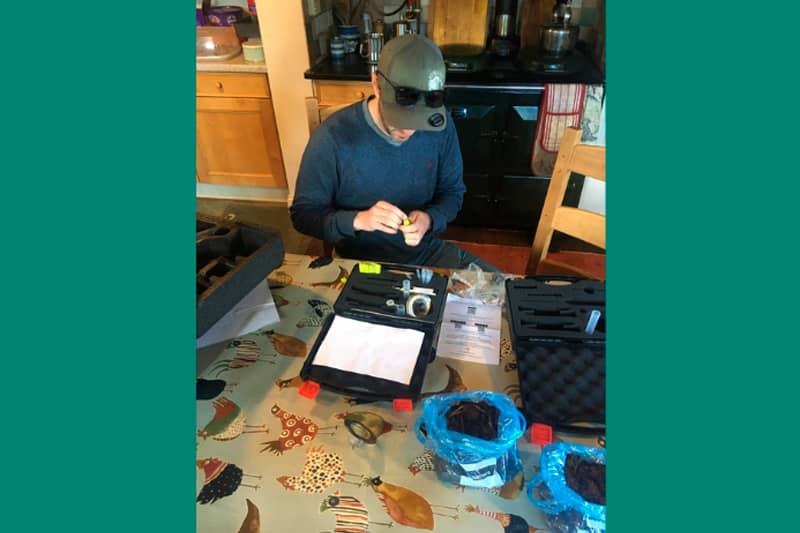 Understanding the role bacteria and fungi play in the soil biome is vital for farmers to optimise nutrient availability, plant health and carbon sequestration. The University of Plymouth team recently popped down to Lesquite Organics (Tom and Nic Tolputt’s organic arable and beef farm near Fowey) to show us a new in-field test for soil microbial mass.

This rapid test measures the number of microbes present in the soil and gives a percentage of fungi and bacteria. Both families of organisms are crucial in the decomposition of organic matter, the mineralisation and transportation of nutrients, and the control of plant pests and diseases. Their populations and distribution can be severely affected by cropping and tillage choice and agrochemical use. As such, it’s in our interest as farmers (and consultants) to be able to monitor and manage soil microbial populations as a measure of soil health.

Although ‘soil health’ is still a very broad and general term, it can be directly linked to not only the numbers of microbes present but the distribution of fungi vs bacteria. In an ideal (agricultural) world, we’d like a distribution that is broadly fungal dominant. If we look at natural soils, such as long term/ancient woodland soils or downland in the UK, we find high microbial mass but with a very strong fungal dominance. The closer we can get to this natural state, the better the chances of producing resilient, healthy plants for both our livestock and ourselves.

Dr Tim Daley was able to conduct tests on a range of soil samples we provided with very different cropping histories (see table below).

Looking at the Table above, field 1 (column 1) was a sample from a field that is in long term arable production and has been plough/power harrowed for many years to establish cereals.

Field 2 (column 2) was a long term arable field, which has been strip-tilled, cover cropped and grazed by sheep for the last three years.

Field 3 (column 3) was from an organic herbal ley that has been in pasture for many years prior.

The fourth and fifth samples (columns 4 and 5) were taken from woodland, although the fifth was woodland covered with wild garlic (taken as a bit of a curveball, as you’ll see).

This highlights the improvements that can be made over a short period with relatively simple, strategic changes in management.

As you can see from Table 1, with the exception of the wild garlic woodland, the plough/power harrow system produced the lowest microbial biomass of all the samples and was bacterially dominant compared to the strip-till system. This highlights the improvements that can be made over a short period with relatively simple, strategic changes in management.

However, looking at the herbal ley figures, you can see the impact of diverse, perennial pastures, with much higher microbial biomass and much more fungal dominance. It also gives an insight as to what could be achieved with the introduction of a herbal ley into an arable rotation, for example. 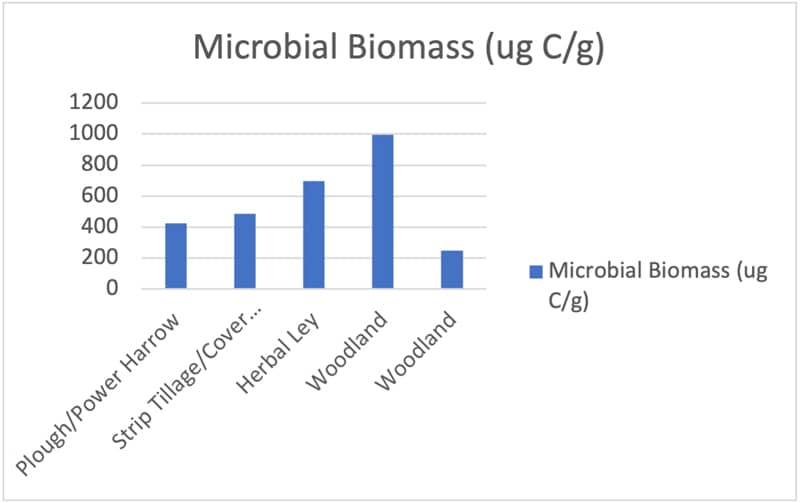 The woodland soil, as we expected, had the highest microbial mass measured and the most fugally dominant sample. This soil wouldn’t have been disturbed for many years and has developed a rich and well-balanced network of microorganisms. The woodland soil underneath the wild garlic, however, was a different story. There’s a reason garlic has been used in herbal medicine and alternative crop protection products for generations: it is a powerful anti-microbial, as evidenced here. 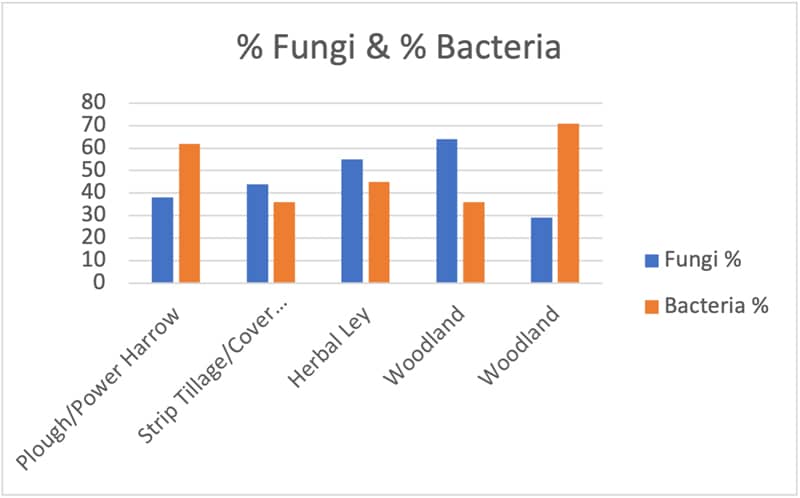 The brief trials run during this visit gives us a snapshot of where technology is going in this area and how it can be used to help us assess soil health for both improved farm management – or even in relation to ELMs.

Being tragic soil geeks, we’d love to get our hands on this kit again to test more soils and build a bigger picture of the soil microbiome around the Southwest… watch this space!

Finally, Dr Tim also brought along a drone with a new specialist camera (and software system) that can analyse crop biomass from above in a range of light spectrums, allowing the user to map and monitor crop biomass in not only grassland or arable enterprises, but also woodland. 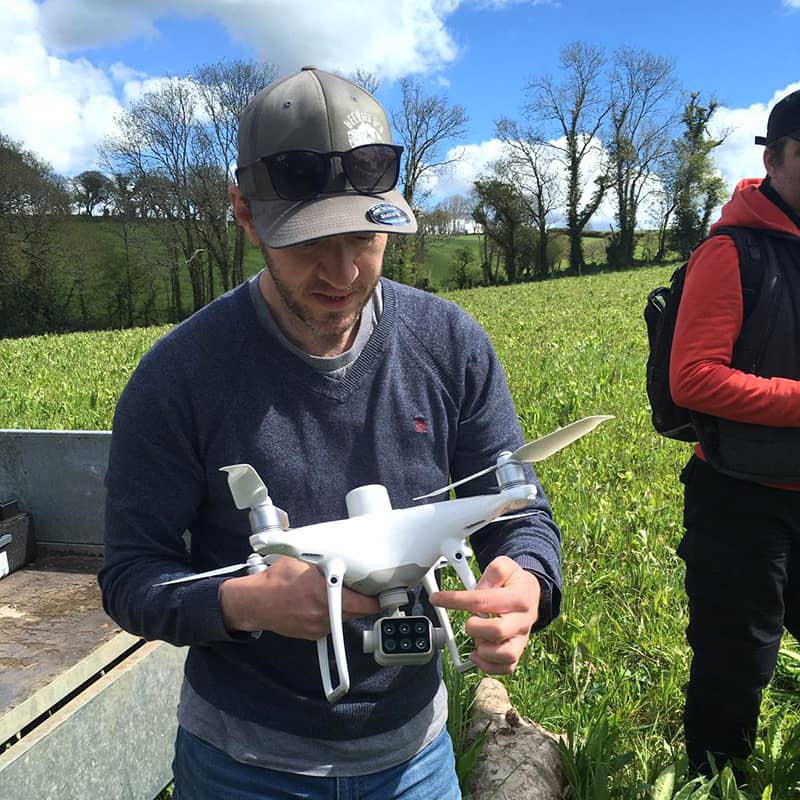 Dr Tim Daley with his drone used for biomass analysis

The team mapped a small area of herbal ley at Lesquite Organics during the visit and we look forward to being able to analyse the finished maps once they are available. Again, another potentially useful bit of tech to help farmers and consultants alike.

Thank you once again to Dr Tim Daley and the team for coming along and showing us this emerging technology. Always a fascinating and useful learning experience for us all! 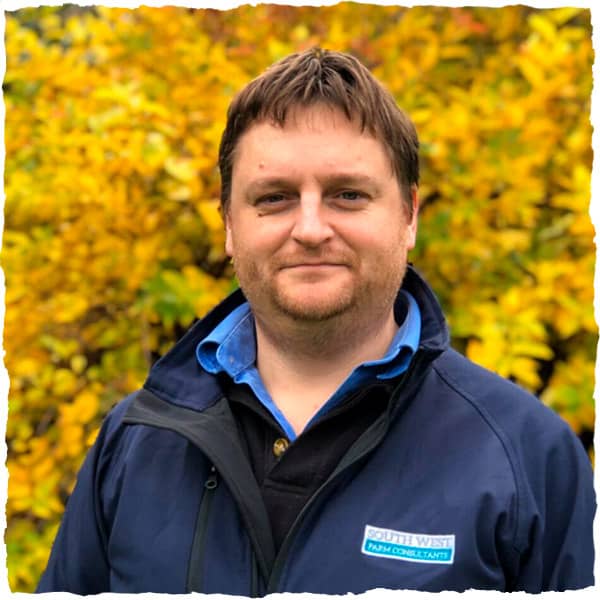