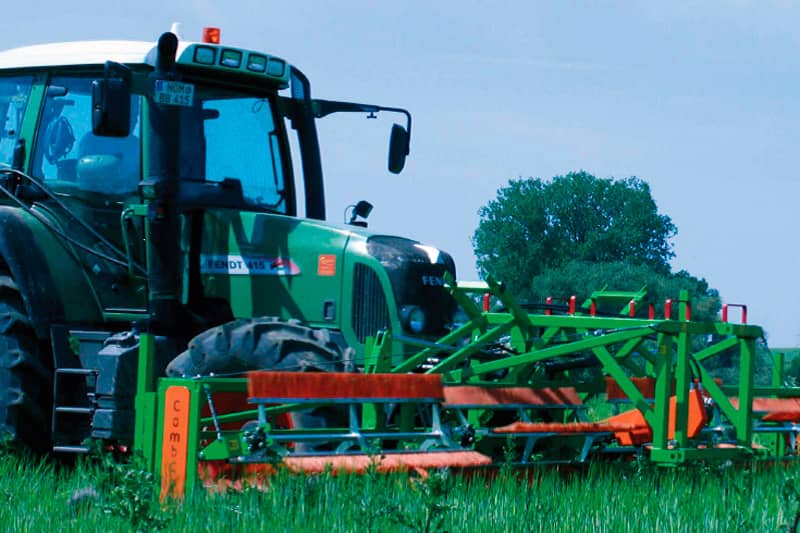 We all know weeds are a problem and even when they have been under control for years, weather, a different crop or just a cultivation at a different time can make weeds germinate that have not been seen before

In organic production we can use a number of weed control strategies that come from good farming practice, stale seedbeds, hoeing and cutting off flowers and stopping the seeds falling to the ground.  We have had finger hoes and toppers for a number of years and now we have another tool to add to our armoury. The Combcut does as the name suggests: it combs through the crop, allowing leaves to flow through the fingers and cutting off the stiffer stalks and flowering heads of weeds.

The machine was developed in Sweden by Jonas Carlson who is an organic farmer who used to have a problem with thistles and cocklebur or xanthium. Combcut was born out of his frustration of not being able to control these weeds.

Combcut is now part of our armoury of weed management strategies.

Even conventional growers are questioning the cost and environmental ethics of herbicides. Combcut opens another window of opportunity in the growing season. We can use finger weeders while the crop is small; Combcut when the weeds are the same height as the crop; and weed toppers when the weeds are taller than the crop and the crop has produced a stalky seed head.

There is an old saying that suggests that you should not let a weed seed and this is what Combcut tries to achieve. By removing the growing point and the seed head the weed is weakened so that the crop can get away and smother the weeds. This as well as weakening the weed makes harvesting the crop easier. Often the problem with hoeing is that the cultivating that the hoes does in a crop germinates more weed seed as it does the job of removing the growing weeds. Combcut does not do this as it cuts the top of the weed off rather than disturbing any soil.

How can we help?

SWFC can now offer the Combcut on a contracting basis to farms across the South West. If interested, please contact us for further details and rates.